On ‘Cosmic Microwave Background’ AnD put their full scope to work. The result was a record that fidgeted restlessly between a bleeding dancefloor and more airy machinist musings. But even suspended somewhere deep in the voids of space, the duo’s industrial insignia was never too far away. To remix the record, then, it made sense to honour it’s foundations with a carefully curated cast gathered from techno’s outer rim.

Released as a two-part EP, the album’s eerie, soothing closer gets picked up by Speedy J and Lucy as Zeitgeber and Black Rain who turn in polar re-workings of “The Surface Of Last Scattering”. The monstrous “Galactic Motion” also gets treated to a Black Rain overhaul, true to the group’s seminal post industrial and punk lineage. Sleeparchive and O/H—the union of David Foster of Huren and Teste, and Orphx’s Richard Oddie—both plump for “Power Spectrum”, one of AnD’s typical sledgehammer works. The original near pales in comparison to what the pair deliver here. Finally the multifaceted Justin Broadrick of Godflesh, Techno Animal, Pale Sketcher and more turns his heavyweight JK Flesh alias on “Non Sky Signal Noise” with ruinous effect. If you thought AnD could’t get any harder, think again. 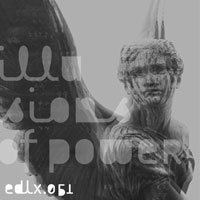