Electric Deluxe proudly presents ‘Connect’ by Echologist aka Brendon Moeller. This Artist definitely needs no introduction, being hailed as Brendon Moeller, Echologist and Beat Pharmacy for his productions in techno and dubtechno since 1994.

His compositions have been released on Francois K’s Deep Space Media, Third Ear Records, Echocord, Mule Musiq, Eskimo recordings, and Rekids just to name a few. Beside Dub, Techno and Jazz, Afrobeat and Psychedelics are the main inspirations that influence his versatile productions.

As with every release on Electric Deluxe there is a story to tell – let’s hear it from the protagonists Brendon Moeller and Speedy J themselves.

Brendon Moeller: “In 2010 I left behind the comfort of recording music in a home studio so that my family and I could spend the first 6 months of the year traveling. The sacrifice: a pair of Event 20/20 monitors and a 32″ screen monitor, replaced by Headphones and a Macbook.

The ability to be engulfed in sound and completely shut out any external interference was like standing right next to a speaker stack in Berghain. It was at this point that I began sketching together the tracks that would make up this release. My only goal was that I wanted to make deep atmospheric Techno that could rock a dancefloor. It was around this point that Speedy J contacted me requesting a remix of a Terence Fixmer track. Perfect timing. Upon completion of the remix, I decided to submit this headphone-produced Techno to Speedy as well and voila, the ‘Connect’ project was born.”

Speedy J :”I’m very excited about this release, I’m a big fan of Brendon’s productions, and it’s an honor to have him on the label! ‘Connect’ has all the ingredients that I want for an Electric Deluxe release. It’s pushing the envelope on all fronts; it’s mental, fat, dirty and pounding, and despite being slightly obscure, it’s a bomb on the floor! Hummer and Freak both show how diverse Brendon is, and together with the wide selection of tools, dubs and mixes, this is probably the most packed release we’ve done so far!”

The ‘Connect’ release will digitally consist of two separate EPs. EP1 mirrors the vinyl EP plus one additional track, the second digital EP presents the alternative mixes, dubs and tools.

‘Connect’ with its diversity and phenomenal sound design truly sets a benchmark in modern techno. 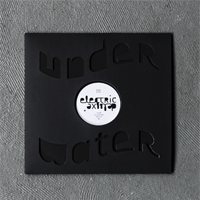